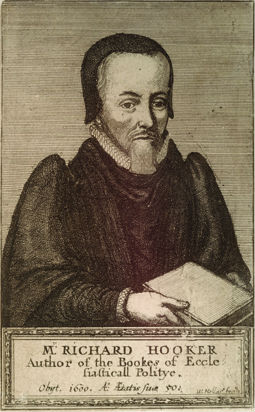 Richard Hooker, who lived in the 16th Century, was one of the foremost Anglican theologians and writers, but was also a humble and mild man, who was happy to spend his later years in this country parish, where he was also near to the extensive library at Canterbury.

Working at a time when there was great conflict between the puritans and the catholics, Hooker's great contribution to the debate was in providing a 'middle way' based on scripture, tradition and reason. In consequence he received heavy criticism from both sides of the theological argument that was raging in the sixteenth century.

Hooker's thinking was not only focussed on the church, but also on its relationship with the state. He wrote on natural, political and church law, and their common basis in the law of God. He regarded church and state as being mutually dependent, together being a 'Christian commonwealth'.

Although few now know the name of Richard Hooker, and even fewer struggle to read his works, which can be heavy-going, he can rightly be regarded as one of the founders of Anglicanism as we know it today. 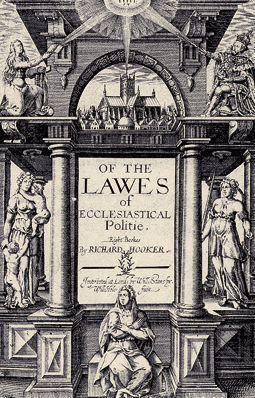 Hooker wrote a considerable number of tractates and sermons, and many of these were published after his death.

However, his main contribution to Anglican thought comes in his eight-volume "The Laws of Ecclesiastical Polity".  It was written to defend "the present state of the Church of God established among us" and aims to be faithful to both catholic and protestant  thinking.

Book One (which includes a nine-chapter Preface) is a discussion of the nature of Law.

Books Two and Three include debate with the Puritans over the interpretation of scripture and the place of reason in interpretation.

Book Four is a defence of Anglican liturgical practices that have been taken over from Rome, stating that they belong as catholic and universal elements of the true church.

Book Five (published while Hooker was at Bishopsbourne) is by far the longest, and can be seen as an extended commentary on "The Book of Common Prayer". It includes detailed discussions on baptism, chanting and ministerial attire - all of which were contentious issues at the time. It has been said that this volume brought Cranmer's 'BCP' to life, and probably had the greatest influence on Anglican life of any books at that time.

The remaining volumes were published posthumously, from almost complete manuscripts that were taken from Hooker's study in Bishopsbourne Rectory after his death.

Book Six has a discussion of lay leadership and the role of ordained ministry, and also deals with justification and the practice of penitence.

Book Seven (actually the last to be published) is a defence of episcopacy.

Book Eight concerns the Royal Supremacy, and the place of the Crown in the Church. 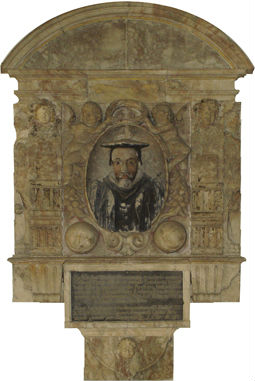 Richard Hooker accepted the living of St. Mary's, Bishopsbourne from Archbishop Whitgift in 1595, and was the Rector of the parish, and also priest of the parish of St. John the Baptist, Barham, which lies two miles south down the Elham Valley.

There is a memorial tablet to Hooker in the Chancel, erected in 1632 by William Cowper, and the East Window was installed in 1890 "by the People of England". The statue near the pulpit is believed to have been in the old Rectory.

Hooker was happy to be a country parson, and devoted his last years to caring for his parishioners, to prayer, and to further study and writing.

The Rectory at that time was opposite the church, slightly up the hill. That building, which had six bedrooms, separate bake house, wash house, stables and barn, has since been demolished and replaced with a more modern home.

In Hooker's time the church would probably have been filled with box pews, and there was no organ on the north side. The various wall paintings were probably still complete. When he died, he left £3  "of lawful English money towards the building and making of a newer and sufficient pulpit in the parish of Bishopsbourne".  He was buried under the Chancel floor, but the exact position is not marked.