Welcome to St John the Baptist, with its green copper spire, situated on the hillside above the village of Barham.

St. John's is a busy family-orientated church with a mixture of service styles, ranging from a traditional 8.00 Communion to a lively Family Service, and also Messy Church. At least two main services each month are a sung Eucharist, led by a choir and organist. During these Eucharists there is normally a Sunday Club which takes place in the Vestry Room – a well-appointed room which was created a few years ago, along with a kitchen and toilet at the rear of the church. More recently new and comfortable chairs were introduced, and we are currently planning to upgrade the sound and video systems.

Since there is now no Methodist Chapel operating in the village, St. John's is pleased to welcome local Methodists into joint services on the third Sunday of each month, and the two church families work well together on united tasks, including 'Kings Club' for children in the school holidays. 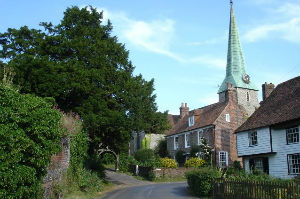 The History of Barham Church

A church is mentioned in the Doomsday Book, but the current building is 14th Century, with a south aisle added in the 15th Century, and a north porch and other modifications completed by the Victorians. The inside is bright and spacious. Features worthy of note are: 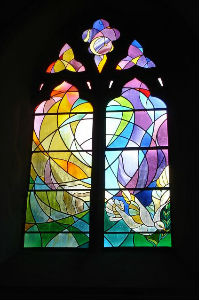 St. John the Baptist, Barham, has been the spiritual heart of this community for very many centuries. History suggests that there was a church in Barham in 809 A.D., and evidence of the original Saxon floor has been discovered under the tower, but the earliest part of the present building starts in the 12th century with the base of the Tower, and continues for the following three hundred years. The church therefore contains Early English, Decorated and Perpendicular styles of architecture with 21st century additions.

The church is cruciform in shape, although the addition of the 15th century south aisle has 'unbalanced' the symmetry.

In the 1880's the Nave floor was lowered, the Choir and Chancel was raised, heating installed, and the entrance porch added.

The Nave (representing the body of Christ) is clear, light and spacious. In the tie beam roof are some of the original fourteenth century timbers and the arcade with its three arches leading into the south aisle of the same date.

The Chancel and Sanctuary (the head of Christ) have an open appearance because there is no chancel arch. In the fourteenth century east window Jesus and John the Baptist, both as boys, with Mary, are represented in modern stained glass by Martin Travers. A piscine, formerly used as a basin for washing the hands of the priest and chalice, is on the south wall. An aumbry or cupboard, used either for the reserved sacrament or for the sacred vessels and books, is just visible in the east wall and is currently used for the reserved Sacrament. The stately English Altar is modern.

The Transepts (the arms of Christ) have each contained chapels in the past. The North Transept (to your left) was a chantry chapel and its blocked up east window indicates where the altar was situated. The whole space became the vestry and now includes the Benefice Office. During the refurbishment of the church in 2004 the raised wooden floor was installed to cover the uneven area of 14th century tiles, marble slabs and a vault, and an upper floor installed to house the organ pipes. The three brasses now rehung on the South transept wall, come from the marble floor memorials under the vestry and were lifted many years ago. They have recently been mounted on cedar to preserve them.  The oldest (c.1370) is of a civilian but is mutilated. The other two (c.1460), are of a woman dressed as a widow and a bare headed man in plate armour. The figures are believed to be of John Digges and his wife Joan, of Digges Place, who are buried in the chapel.

Set in the wall just behind the modern pulpit is a curious stone, once used to support a statue. The round stone with a cross was originally a Saxon grave marker.

The South Transept is now used as the Lady Chapel, "the Chapel of Our Lady". The oak altar was once the high altar. The walls contain various mural tablets. Hanging high on the west wall is a helmet, said to have belonged to Sir Basil Dixwell of Broome Park. The helmet probably never saw action but it was carried at his funeral in 1641. The modern glass window was designed and made by Alexandra le Rossignol to mark the Millennium. In the corner is a 'squint', probably used to give those outside a view of a statue or an altar. This chapel is used regularly for Morning Prayer and is available for private prayer. 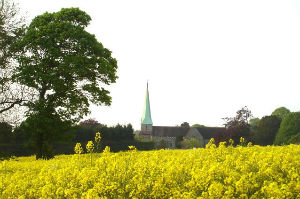 The 14th century Font situated in the South Aisle is large enough to submerse a baby, as would have been the custom of the time. The bowl is octagonal, representing the first day of the new week, the day of Christ's resurrection. The cover is Jacobean (17th century).

Nearby is the curious South Doorway with one door inserted within a larger opening and was probably the usual way in to the church before the 19th century refurbishment lowered the floor of the Nave and the new north door added.

The imposing but overwhelming marble memorial to several members of the Dixwell family, who built Broome Park, is from the eighteenth century and once stood in the South Transept.

At the West End is hung the lists of Rectors and Priests-in-Charge, the first known being Ortho Caputh in 1280A.D.  Notice Richard Hooker 1594 the famous author of "The Laws of Ecclesiastical Polity". He was also Rector of Bishopsbourne where he lived. The present Rector is incumbent of the five parishes of Barham, Adisham, Kingston, Bishopsbourne and Wymynswold. These parishes are known as the Barham Downs Benefice.

The tiles incorporated into the wall were originally part of the Chancel floor about 1375. They were left by John Digges, Rector of Bishopsbourne, whose will instructed that he was to be buried in the Chancel at Barham and "my executors are to buy Flanders tiles to pave the said Chancel". Further tiles were recently found in the Vestry.

In 2004, a Gallery was reinstated in the Tower as the Ringing Chamber with access by the modern staircase.  The peal consists of five bells and is rung regularly.

In 2014 the Victorian and later pews were replaced with chairs, making the church a far more flexible space for a variety of both church and village uses.

The 13th century window by the North Door is of St George and the dragon, given by the survivors of the 23rd Signal Company Regiment as a memorial of the First World War.  This window is also the work of Martin Travers.

Barham Downs have seen much military service-from Saxon battles to a training ground and assembly point for embarkation in modern times. 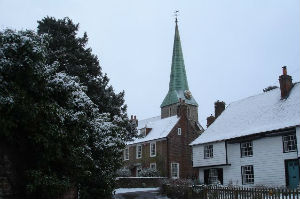 The Porch is worth a pause on the way out. Two wooden plaques list the names of the men from the village who were killed in the Great Wars, among them being Field Marshall Lord Kitchener who lived within the parish boundaries at Broome Park.

Over the years much care and preservation have kept the church here in its present good order. Like most English parish churches, the needs of the worshippers have brought about changes in style and layout.

Coloured frescos once decorated the walls and pillars, the last to fade being a representation of a ship to the east of the Nave. Statues are recorded of St Mary the Virgin, St Anthony, St Christopher, St Nicholas and St John. There is no evidence of a Screen but a will of 1475 notes a Rood, presumably over the Chancel Step. The old Communion plate has been lost or stolen and the only remaining piece is a large silver paten inscribed "St John the Baptist, Barham 1772".

The Registers of baptisms, marriages and burials are intact from 1558 but are by law deposited in the Diocesan Archives (at Canterbury Cathedral) for research and safe keeping.

Thank you for reading this - we hope that one day you will be able to visit us in Barham  Parish Church. It is a living part of the Church now and we hope that you will carry away with you, not only a last glimpse of the graceful copper-sheathed spire, but also something of the atmosphere of a place saturated with past and present worship and prayer. God be with you.