Welcome to St Mary's church,  in the small picturesque village of Bishopsbourne. Situated at one end of the 'The Street', it is five miles south of Canterbury in the Elham Valley. The church has recently undergone renovation work, which has seen a complete re-decoration inside, including restoration of the mediaeval stained glass. 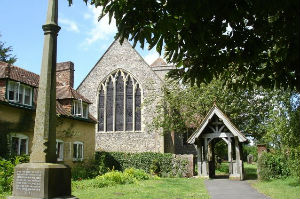 Bishopsbourne is a small and traditional village which was home to the writer Joseph Conrad, and even more significantly Revd. Richard Hooker. Hooker was the Rector from 1595 until his untimely death in 1600. He played a major part in the development of Anglicanism as the 'middle way' between the two extremes of Protestantism and Catholicism. His eight volume work ‘The Laws of Ecclesiastical Polity’ includes a commentary on Cranmer's ‘Book of Common Prayer’ as well as reasoned arguments about the governing of the Church and its relationship to the State. Hooker was buried in the Chancel of the church, and a memorial to him can be seen on the south wall. If you would like to know more about Hooker, see the special page we have created about him.

Other features worthy of note are:

Services are held in traditional language, including either choral evensong at 6.00 p.m. in summer time, or matins at 11.00 a.m. in winter time, both on the first Sunday of every month, and Holy Communion on the fourth Sunday.