Welcome to St Giles, the spiritual heart of the village of Kingston, a quiet village that mainly follows just one street up the side of the valley.

The church is very much at the centre of the village, and welcomes families and people of every generation. We currently have one service each month, on the fourth Sunday, which is a Family Communion starting at 11.00 am. 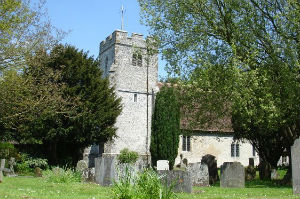 Although extensively re-modelled at the beginning of the 20th Century, Kingston church still shows clearly the design of an early mediaeval church without side aisles. It is an intimate setting for worship.

The church also owns another ancient building, Kingston Barn, which is managed by a separate group of trustees as a community centre. As a Millennium project, it was extensively restored, and is now an excellent venue.

The ‘Kingston Brooch’, an important piece of Anglo-Saxon jewellery, dating from the 7th Century, was discovered in a Tumulus on Kingston Downs in 1771 by Rev’d. Brian Faussett. It is 8cm in diameter, made of gold, with garnet, blue glass and shell settings. Now on display in the World Museum, Liverpool.

A tour of Kingston Church

In the early years of the Saxon settlement, when Kent was an independent kingdom, Kingston was one of the villages that belonged to the King. This is shown by the early form of the name 'Cyningestun' (The King’s Manor), and also by the rich finds in the nearby Saxon burial ground, including the ‘Kingston Brooch’. Once the Kingdom of Kent ceased to exist, the village seems to have sunk into obscurity, as it is not mentioned in the Doomsday Book, apparently being included with one of the neighbouring villages.

However, it seems likely that there was a church here at that time, and that much of it remains in the present building. On the evidence of five original quoins (stonework at the angles of the building) which are of flint rather than dressed stone, two authorities have dated the walls of the nave and part of the chancel as 11th century or Saxo-Norman.

The church is built of flint, as this was the only building stone available in the area, and only in the later parts of the building is imported stone used to strengthen the angles and openings. The walls themselves are about three feet thick. 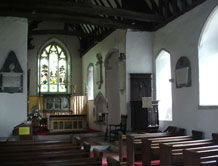 The church is usually entered by the north door, to the right of which is a well-preserved holy water stoup. The porch was rebuilt in 1813, and it is worth noting that the inside walls are of shaped chalk blocks.

The interior is well lit by several deeply-splayed windows. They are of various styles and periods, mainly 14th century, and all fairly simple. Most attractive are the pair towards the front of the nave. These are in the Decorated style (early 14th century) and the original east window was very similar, but with a rose in the upper section. This was removed in 1897 and replaced by the present window – given by the Rector in memory of his mother.

The chancel was originally square, but was lengthened by about ten feet in the 13th century. The eastward extension is just visible outside through the plaster on the north side.

In the south wall of the chancel are the piscine, originally used for washing the communion plate, and the sedilia, a seat for the priest.

Opposite, in the north wall, is the aumbry – a cupboard in which is kept the reserved communion sacrament which is taken to those who are house-bound. The carved door and iron hinges are very old, but not original to the church, having been given by the Rector in 1928.

The pulpit is also of carved oak with smaller decorative hinges, and is Jacobean or possibly Elizabethan.

During restoration work in 1846, when the church was thoroughly repaired and redecorated, the gallery and chancel screen were removed, a new floor laid, and new pews were put in. To pay for the pews, the parish had to borrow £100, which was paid off in four yearly instalments.

The present pews date from 1886 when the entire church was again re-floored and re-seated.

In 1873 the lath and plaster ceilings were removed, exposing the roof timbers. The two carved angels in the chancel roof also date from this time. The roof itself is a king-post construction of very plain and archaic type. Parts of it appear to have been renewed, but most of the timber work is probably early 14th century.

The Font, standing under the tower, has a rather interesting history. It dates from the beginning of the 13th century and at some time during the 18th century it was removed and discarded because it was damaged. After being used for some years as a feeding trough by a local farmer, it was rescued by Brian Faussett, who was curate of Kingston and a well-known antiquary. He kept it in a summerhouse at his home near Canterbury, from where it was eventually returned to the church and re-consecrated in 1931.

The tower was added to the west end, probably in the 14th century. It contains 2 bells hung for chiming only. The smallest is blank and the second is inscribed “Joseph Hatch made me 1610”. There was a third bell which cracked, now kept in the Canterbury Heritage Centre. This was probably made by William le Belyetere in about 1350. 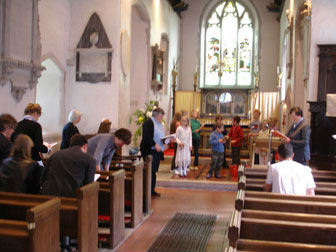 Outside the church is surrounded by its graveyard, with headstones still in place – the oldest being near the door and dating from about 1740. The burial ground is still in use, and ecologically managed by the local community. The church and churchyard require constant care and vigilance so that they may remain the spiritual heart of Kingston for the next millennia.

The church building has stood on this place for about 1000 years as a living witness to the love of God for all people. The bells have called the people of this community to worship God for hundreds of years, and continue to do so today.

We hope you are able to enjoy your visit, or perhaps join us for worship. On the ‘What’s On’ page you will find a list of current services, and also information about other events.

The Legend of St. Giles

St. Giles was a hermit who lived in the 8th century in a forest near the River Rhone. He lived on the wild plants of the forest and drank the milk of a doe which he had tamed and which lived with him in his cave.
The king of the Franks, Childebery, used to hunt in the forest, and on one occasion the dogs chased the doe until she reached the safety of the cave. A huntsman shot an arrow into the cave, and when the king entered he found Giles with his arm round the doe, and with his hand pierced by the arrow, which he had warded off from his pet.
The king was greatly moved by this action and often visited the hermit afterwards. Eventually he gave the land around the cave and built a monastery on it, of which Giles became the first abbot. He prayed that his wound would not heal so that he might learn to bear pain as his Saviour before him.
St. Giles is traditionally the patron saint of 'cripples' (although today we would say 'disabled people') and many churches and hospitals throughout Europe have been named after him.